The Alta Gracia Research Project is a multi-year effort to document the development and eventual success or failure of Alta Gracia, the only apparel factory in the developing world to:

Over the period 2010 – 2014, the Project published three academic reports that are available online below. Subsequently the initiative was merged with an effort to develop a book to tell the full story of the Alta Gracia factory in a more complete and broadly accessible fashion. Sewing Hope: How One Factory Challenges the Apparel Industry’s Sweatshops, was published on October 3, 2017. It examines the origin, evolution, impacts and significance of this unique apparel factory.

Joining Professor John Kline as co-author of the book is Sarah Adler-Milstein who, as Field Director for the Worker Rights Consortium, was instrumental in the development of a living wage formula and compliance audits of labor standards. Written from personal experience and based on the lives of factory workers, the book reveals how adding just $0.90 to a sweatshirt’s production price can change the workers’ lives: from getting a life-saving operation to reuniting families; buying school uniforms to first-ever bank loans. 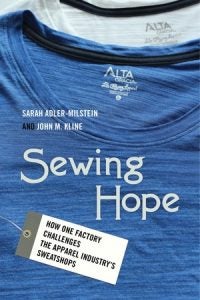 An initial Research Report issued on August, 30 2010 traced the factory’s origins in the anti-sweatshop movement and its initial start-up period:

A Research Progress Report was released on December 5, 2011 that examines the first 18 months of operations at the Alta Gracia apparel factory in the Dominican Republic:

The third Research Report was released in August of 2014. This report analyzes the factory’s growing success; documents its impact on the lives of workers, their families and the local community; and contrasts this model with failures in the apparel industry’s current system of factory labor codes and monitoring: